Update October 6, 2010: Nearly two years ago, on November 14, 2008, I wrote the article below about the numerous articles in the mainstream media raising the specter that we were heading into a depression. As I documented below, this hype had become so prevalent that the majority of Americans actually believed that a depression was likely. And, no wonder - the media was telling them on a daily basis that's what was happening or about to happen!

Late 2008, turned out to be the almost exact bottom for global stock prices which have come roaring back. Most countries experienced a moderate to severe recession. But, don't tell that to Paul Krugman who this past June declared that we're in a depression. Global stock prices have since risen by another 10 percent!

Reuters recently published two articles which were widely circulated with the following headlines:

Merrill Lynch was in the news a lot in 2008 due to the problems they've gotten into with sub-prime mortgages which led to the acquisition of Merrill by Bank of America. I contacted Merrill Lynch to comment further on CEO Thain's extreme remarks.

My question was, if he is stating publicly that things are as bad as during the Great Depression, is Merrill telling their retail investing clients to sell their stock holdings to avoid a further decline in stock prices? Interestingly, a Merrill spokesman stated that their analysts recommend a different asset allocation and they "don't care what Thain says" and also cited a "difference of opinion" between Thain and Merrill's investment analysts.

Most importantly, Thain's comments seemed in large part to be in reference to and motivated by Merrill's own problematic situation. Merrill took on so much toxic mortgage paper that the company had to be sold to a stronger financial institution. Reuters failed to point that out.

In the case of the comments by 86-year old John Whitehead, former Chairman of Goldman Sachs, his major concern seems to be the growing federal budget deficit and the lack of desire of either party to reign in spending or increase taxes. In his view, this could lead to the United States losing of its AAA credit rating and lead to increased borrowing costs. This is a legitimate concern but is highly unlikely to happen. While the folks in Washington have done some dumb things, there is talk of increasing taxes on the highest income earners and there will be increased efforts to reduce spending in certain areas. Yes, the deficit will widen (see this chart of annual change in government debt outstanding) as it always does in a recession (tax receipts go down while spending increases) but this will reverse in the not too distant future. (Note that the worst year-to year increase in the federal debt, a near doubling, happened in World War II to finance the war).

I was unable to reach Whitehead regarding the comment attributed to him by Reuters that he supposedly thinks that the current economic problems could, "...be worse than the depression." The reporter told me that Whitehead made these comments in a private session at a Reuter's summit. 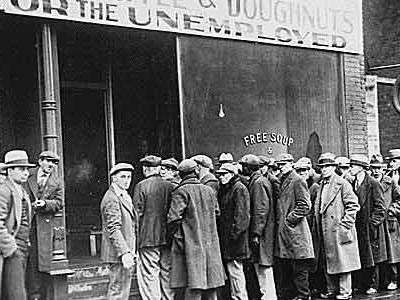 Rather than making comparisons to the Great Depression, how about comparing the recent downturn to those that happened more recently. Consider the recession of the early 1980s when we had double-digit long-term interest rates and inflation (whereas both those readings now are under 5 percent) and the unemployment rate rose to nearly 11 percent, no where near recent levels.

Another myth propagated by some in the financial media is the "cost" of various government interventions. According to this recent CNBC piece, the supposed cost of government actions to combat the financial crisis of 2008 is well in excess of $4 trillion. Make no mistake of their referring to the "tab" and their tracking "actual spending." Well, the actual cost here is no where near one trillion dollars let alone four. The vast majority of what's listed here are lending facilities (which are often backed up with high quality collateral) which are not expenditures. Other items are investments. This is quite simply the worst piece of analysis I've seen!

An interesting exchange got the media's economic negativity out in the open on the O'Reilly Factor on November 12. Bill O'Reilly discussed the weak stock market and economy with Fox Business reporter Terry Keenan. O'Reilly offered some terrific common sense advice at the outset by telling viewers not to examine their monthly investment statements, to stand pat and not panic. Keenan, unfortunately offered some terrible advice and unsubstantiated opinions in response (which thankfully, O'Reilly, challenged).

Keenan said, "I think people should have been opening their statements all along and they might not have lost so much money because they bought into the buy and hold."

I've heard this countless times before. While market timing sounds good in theory, it simply doesn't work for the folks or pros over the long-term. Keenan's suggestion that by following investments closely people could have minimized their losses is absurd. In fact, in my decades of experience working with clients first as a financial advisor and now as a writer, more often than not, people panic during tough times and foolishly sell after a major decline - precisely the time during which they should be thinking about buying.

Next, Keenan said, "We are going into a severe downturn, the mother of all recessions. It's going to be worse than most people expect...Unemployment is going to go through the roof."

Keenan doesn't seem to understand that the media has been scaring people during all of 2008 and the toll that this has taken is confirmed by a CNN/Opinion Research poll from October which found that an astounding 6 in 10 Americans said that they believe a depression (not just a recession) is likely! To O'Reilly's credit, he correctly pointed out to Keenan that she was speculating and that people like her in the media are scaring the public and contributing to the economic problems.

Keenan's last erroneous statement was, "We're having a credit contraction the likes of which we have not seen since the Great Depression." I have heard many folks in the media say countless times statements like "credit is frozen" and "no one is lending" and that the "banks are hoarding the government money" that they have received as part of the federal government financial rescue package. This is all hyperbole and all wrong. Banks are indeed lending and in fact loans and leases made are still growing as we can see in this up-to-date data from the Federal Reserve. Loan growth has slowed but no where near as slow yet as during prior recessions.

One final point on all of the unsubstantiated criticism that banks are supposedly just sitting on the government capital injections. Besides not being true, do we think that lenders should rush to make loans to anyone and any company that wants to borrow? Isn't that what got us into this real estate mess in the first place? Lenders are being more thoughtful about to whom they lend money and under what terms. This is completely normal for what happens in a recession after some excess lending takes place.