I was fortunate in business school (at Stanford) to meet and listen to an excellent presentation by Steve Jobs. One of my professors invited Jobs to speak to a relatively small class I took during my first year.

At the time, Jobs was in the early stages of his latest venture - a company called Next. I still have a Next t-shirt that he personally handed out that day to all the students in the class.

Although the technology industry wasn't something I ever saw myself working in, I listened closely to everything Jobs said that day. His words and insights had a significant impact on me and my future ambitions.

It's too bad I don't have a video of the event - it would be fun and memorable to view it now and share it with you. (Below is a speech he gave at Stanford's 2005 Graduation.)

I do remember that he told us that there would be many forces that would cause us to doubt our abilities to do something entrepreneurial and off the beaten path. Well intentioned parents and others, he said, could be expected to recommend that we stay in seemingly safer and more stable jobs at established companies.

He also explained his concept that marketing is all about educating customers. He said that because he believed in designing products and services that made sense for and that which would be attractive to consumers but which consumers wouldn't be able to say in advance that they wanted.


With that as background, a recent article entitled "Steve Jobs: America's Greatest Failure" by Nick Schulz, a resident fellow at the American Enterprise Institute, caught my eye. Here are the highlights followed by some additional comments from me:

Everyone today thinks of Jobs as the genius who gave us the iPod, MacBooks, the iTunes store, the iPhone, the iPad, and so on. Yes, he transformed personal computing and multimedia. But let's not forget what else Jobs did.

Jobs (along with Steve Wozniak) brought us the Apple I and Apple II computers, early iterations of which sold in the mere hundreds and were complete failures. Not until the floppy disk was introduced and sufficient RAM added did the Apple II take off as a successful product.

Jobs was the architect of Lisa (photo below), introduced in the early 1980s. You remember Lisa, don't you? Of course you don't. But this computer - which cost tens of millions of dollars to develop - was another epic fail. Shortly after Lisa, Apple had a success with its Macintosh computer. But Jobs was out of a job by then, having been tossed aside thanks to the Lisa fiasco. (John Sculley, former president of PepsiCo, succeeds Jobs as CEO of Apple.) 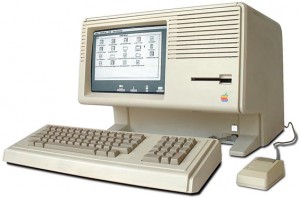 Jobs went on to found NeXT Computer, which was a big nothing-burger of a company. Its greatest success was that it was purchased by Apple - paving the way for the serial failure Jobs to return to his natural home. Jobs' greatest successes were to come later - iPod, iTunes, iPhone, iPad, and more.

Jobs is a great entrepreneur for another reason. Lots of ninnies can give customers products they want. Jobs gave people products they didn't know they wanted, and then made those products indispensable to their lives.

...Steve Jobs is a reminder that failure is a good and necessary thing. And that sometimes the greatest glories are born of catastrophe."


Everyone likes a winner and to celebrate success. Accomplished professional athletes, business people and entertainers grace popular magazine covers and headline television specials and programs. We hear how much money they make in a year or estimates of their net worth but we don't offer hear about the failures and obstacles they endured (outside of drug and alcohol abuse) on their way to professional success.

Of course, we want to minimize failures and the costs (real and otherwise) of those failures. But, when you take risks, you will make mistakes. Perfection isn't possible and emotionally unhealthy to expect.

That's why we shouldn't think that all is lost if we're laid off, fired from a job or our kids don't make the team or get to play their preferred position on their sports' team. (That's not to say that you shouldn't speak up and speak out over unfair or biased poor decisions.) Cream rises to the top over time - it just doesn't always happen as quickly as what we might like!

With your personal finances, career and even your relationships, it's a marathon not a sprint. Some days, weeks, months and even years will go better than others. What matters is the journey and your long-term trajectory.

If Steve Jobs had curled up into a ball in a corner when he was pushed out of Apple in 1985, he (and all his customers) would have missed out on the best that was yet to come.