Comparing the Current Economic Recovery to Prior Ones


A recent Wall Street Journal story comparing the current economic recovery to those prior is getting lots of attention. The article, "Inside the Disappointing Comeback" begins by stating, "Two years ago, officials said, the worst recession since the Great Depression ended. The stumbling recovery has also proven to be the worst since the economic disaster of the 1930s."

An extensive graphic (below) shows how the current recovery stacks up against the "fastest" "average" and "slowest" since World War II. 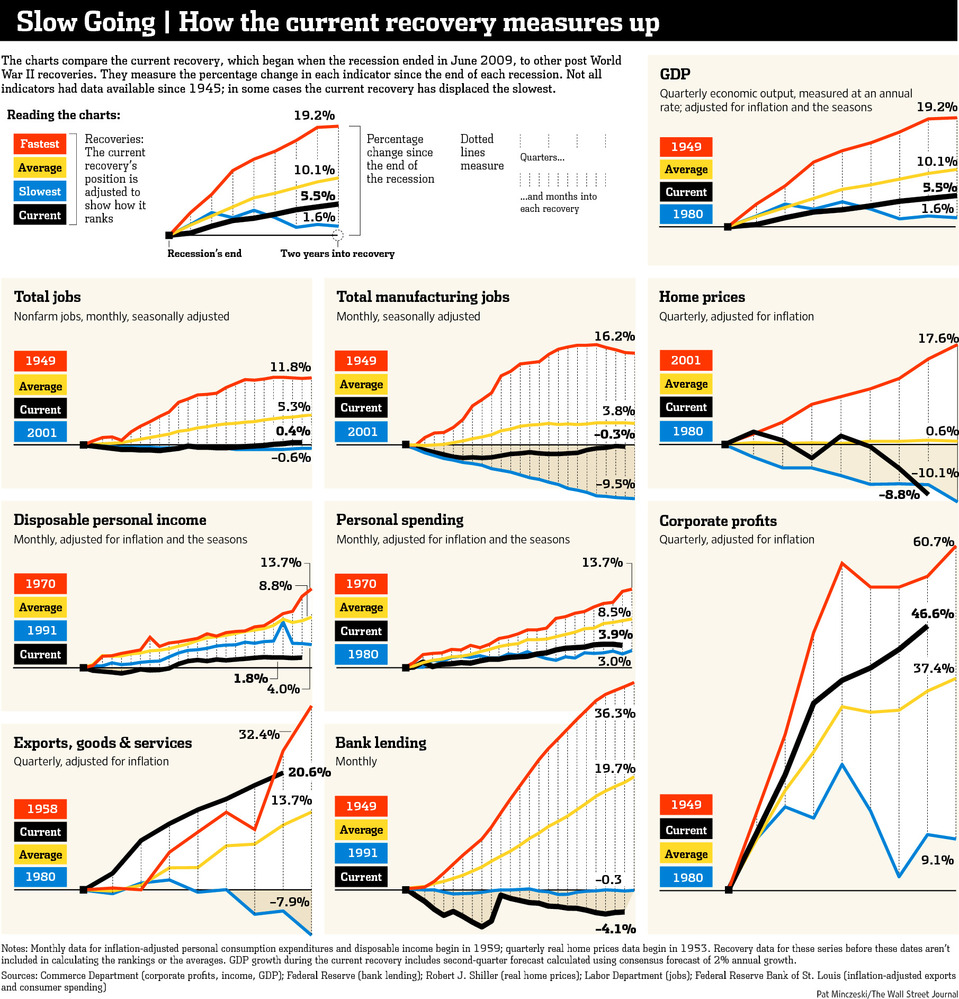 At a macro level, I agree that the economic recovery has been "disappointing," especially in terms of job growth, although as you can see in the graph above, job growth was even more anemic after the 2001 recession. That said, I don't agree with some of the WSJ's analysis and methodology.

Where the WSJ Went Wrong

One significant problem with the WSJ analysis is that they compared the current post-recession recovery to similar periods only going back to World War II. That's not a long period of comparison when discussing economic issues. The financial crisis and panic of 2008, was the first of its kind in a full century - since the Panic of 1907 to be exact. It would be more useful and instructive to compare the current recovery to those taking place after more similar recessions/crises.

The WSJ noted the bright spot of exports:

"Exports, particularly of manufactured and agricultural goods, are improving, in part because of booming developing-country economies and the weaker dollar. They are expected to pick up in the second half of the year as the temporary shock fades from Japan's earthquake and tsunami. In a hint of this, the Institute of Supply Management on Friday reported an uptick in manufacturing for June. Higher corporate profits, stock prices and business investment also are supporting the expansion."

As I've discussed in many articles, American companies are growing and expanding which is why U.S. corporate profits and stock prices have come roaring back during this two-year recovery. The problem continues to be that companies are too often choosing to expand and hire overseas rather than domestically (in the U.S.). There are two primary reasons for this:


These two reasons are somewhat connected. If the business environment in the U.S. was more welcoming, more companies would choose to locate and expand in the U.S. That in turn would lead to more domestic growth.

Stay tuned - I expect this issue to likely be the single most important topic discussed and debated in the upcoming 2012 Presidential race.

The WSJ article identified some other worries about the economic recovery:

"...this recovery may remain lackluster for years, many economists say, because of heavy household debt, a financial system still damaged by the mortgage crisis, fragile confidence and a government with few good options for supporting growth.

...Banks are less able or willing to lend than before the recession. Since the recovery started, banks have reduced money they make available through credit card lines from $3.04 trillion to $2.69 trillion and have reduced home equity credit lines from $1.33 trillion to $1.15 trillion, according to the Federal Reserve Bank of New York."

Households and businesses have been paying down debt and debt has been reduced as well through foreclosures and bankruptcies, which increased during the recession as typically happens. Consumer confidence is a lagging economic indicator and useless as a predictive tool.

For sure, lending standards are tighter today than they were before the recession. That makes sense and is typically what happens as the result of a recession, especially a severe one. It's a good - not a bad thing - that lenders are being more cautious about extending loans and providing more limited credit lines. What would be the value of making large, high risk loans to individuals and businesses with a low probability of paying back those loans? That's what created so many of the excesses in the real estate sector which led to the severe downturn!