False Economy: Saving Money on This Summer Activity Could Be Catastrophic for Your Kids


In ground pools are disruptive and costly to have installed. And, in some communities, despite the fact that a pool won't enhance your home's value, you'll get socked with higher property taxes for your new pool.

So, increasing numbers of folks have turned to portable pools which have gained in popularity as a low cost and simpler alternative to an in ground pool. Unfortunately, that financial savings may come at a bigger expense - the potential drowning of a young child. In fact, according to a just released study from Center for Injury Research and Policy of The Research Institute at Nationwide Children's Hospital, every five days a child drowns in a portable pool during the summer in the U.S. 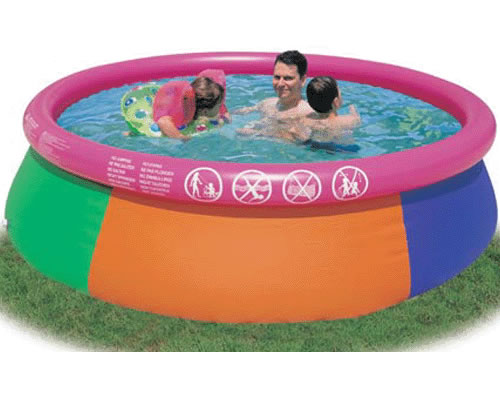 Here's what you should know:


"The study, which...will appear in the July 2011 print issue of Pediatrics, found that every five days a child drowns in a portable pool during the summer in the United States. The majority of cases in the study, which looked at both fatal and non-fatal submersion events, involved children under 5 years of age (94 percent), involved males (56 percent), involved pools in the child's own yard (73 percent) and occurred during the summer months (81 percent).

"Because portable pools are generally small, inexpensive and easy to use, parents often do not think about the potential dangers these pools present," said Gary Smith, MD, DrPH, senior author of the study and director of the Center for Injury Research and Policy at Nationwide Children's Hospital. "It only takes a couple of minutes and a few inches of water for a child to drown. It is important for parents to realize that portable pools can be just as dangerous as in-ground pools."

It is also vital that parents realize that while supervision by an adult when children are in a pool is important, it is not enough. More than 40 percent of the children in this study were being supervised by an adult at the time of the submersion event. In 18 percent of cases, a brief lapse in supervision, such as socializing with neighbors, answering the telephone and doing chores, was enough to allow a submersion event to occur.

The study's authors emphasize that multiple layers of protection should be used to prevent portable pool submersions, including measures to prevent children from accessing pools when adults are not present, keeping children safe during use and being prepared to respond if a submersion injury does occur.

A hurdle that parents face is the relatively high cost or lack of availability of drowning prevention tools such as isolation fencing, safety covers, lockable or removable ladders and pool alarms specifically designed for portable pools.

"Drowning prevention tools used for in-ground pools are often either too expensive or simply not available for portable pools," said Dr. Smith, also a professor of Pediatrics at The Ohio State University College of Medicine. "Portable pool manufacturers should develop more effective and affordable tools to help parents decrease the drowning hazards associated with these products."

This is the first study of pediatric submersion events occurring in portable pools. Data for this study were obtained from the four U.S. Consumer Product Safety Commission data banks, the Death Certificate file, the Injury/Potential Injury Incident file, the In-Depth Investigation file and the National Electronic Injury Surveillance System."